Macron welcomes Putin ahead of the G7 summit 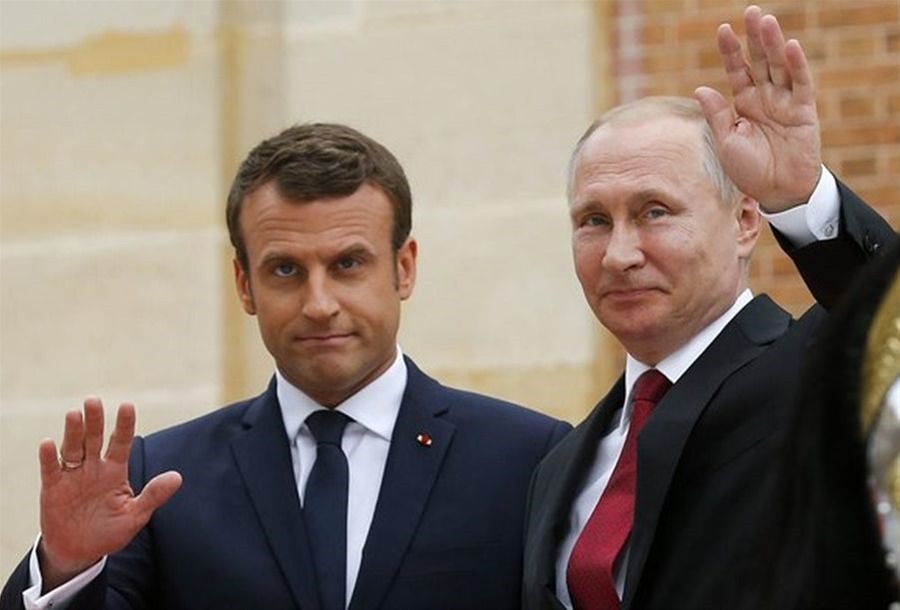 The head of the Kremlin is expected in the fortress of Breganson, the residence of the presidents of France where Emanuel Macron spends his vacation, at 16.00 local time (15.00 Greek time). The two leaders, who met at the G20 summit in Osaka in June, will make statements to the press before considering the shocking crises in the world.

With this meeting, Emanuel Macron seeks to tie the Russian president to multilateralism in the management of international relations and to the discussions that will occupy the G7 summit, from which Russia has been excluded since 2014 and the annexation of Crimea. .

Dialogue "is necessary with Russia's big neighbor," said a source in the French presidency, as Moscow, whose relations with the West are complicated, is an inevitable interlocutor on hot international issues.

Libya, Iran, Syria and Ukraine will be the main crises on the menu of the Franco-Russian summit talks.

For Paris, the assumption of the Ukrainian presidency by Volodymyr Zelensky creates opportunities to promote a settlement of the crisis in the pro-Russian, separatist provinces of eastern Ukraine.

"The central issue will obviously be the revival of the Minsk agreements for a peaceful settlement in eastern Ukraine," said Alexander Baunov, an analyst at the Carnegie Center. "The main promise of the new president of Ukraine is the end of the war. Vladimir Putin is ready for a repeat of the peace effort if a federal regime is granted in Donbass. There is a real opportunity for progress here. "Macron would be happy with the end of the war in Donbass, to go down in history like Nicolas Sarkozy with Georgia," according to the analyst.

The meeting "is a very useful attempt to get France, and possibly Europe, out of a stalemate" in relations with Russia, former French Foreign Minister Iber Ventrin said in an interview with Le Figaro.

Since 2017, Macron and Putin have remained in touch, which does not mean that the French president avoids criticism of Moscow. "Europe must have a dialogue with Russia," which, for its part, "must make efforts," he said.

"In recent months, political contacts have intensified. Contacts in the cultural and humanitarian fields are also very intensive. "In 2020, 'Saisons russes' will be organized in almost all regions of France," said a Kremlin adviser.

To remove a point of friction in Franco-Russian relations, Russian justice has decided to release French banker Philippe Delpal, who has been detained since February on fraud charges and has now been placed under house arrest. Macron had repeatedly discussed his case with the Russian president.

Syria and Iran on the menu

Regarding Syria and Iran, Paris says it wants to ask the Russian president to use his influence over Moscow's two allies.

France is deeply concerned about the situation in the Syrian province of Idlib, where Damascus regime forces are attacking Syrian rebels with the support of the Russian air force. "We have a very clear message to the Russians: use your influence in Damascus to stop this operation," Paris said as Russia joined the Syrian regime's military offensive, killing casualties among the civilian population. . Paris fears a mass exodus of the population, but also the dispersal of dangerous jihadists.

The Kremlin has announced that a Russia-France-Germany-Turkey quadripartite summit is likely to be discussed in Breganson.

The nuclear deal with Iran

France also hopes for Russia's support in trying to salvage an international nuclear deal with Iran. "As guarantors of the agreement, Paris and Moscow must work together to de-escalate." "If Russia reiterates that Iran must abide by its obligations under the agreement, it will greatly strengthen our position," a French diplomatic source said.

It is also possible that Emanuel Macron will discuss the issue of mass arrests of protesters in Moscow calling for "fair elections". During their first meeting in Versailles in 2017, the French president did not hesitate to publicly criticize the arrests of homosexuals in Chechnya.